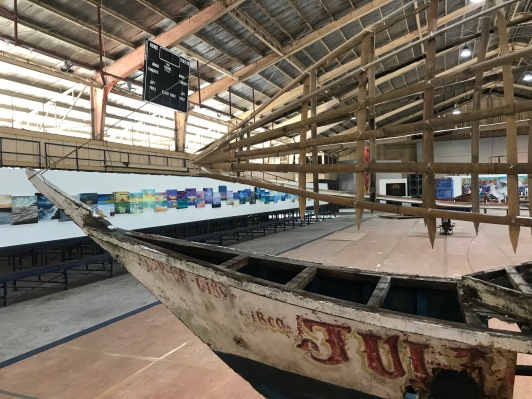 “VIVA EXCON, the Visayas Islands Visual Arts Exhibition & Conference, was initiated by Black Artists in Asia (BAA) in Bacolod City, Negros Occidental, in 1990. Conceived as a biennial, VIVA EXCON has since been staged in Dumaguete, Iloilo, Cebu, Leyte, Bohol and Samar. The last VIVA EXCON was held in Iloilo in 2016 attended by over 350 delegates and guests.

[VIVA EXCON] was an attempt to bridge the islands by linking-up art communities, to provide a venue for sharing knowledge, to discuss issues affecting artmaking in the region, and to consolidate the Visayan art scene. It was created to address the specific urgencies of Visayan artists & cultural workers persisting in the shadows of Manila’s cultural imperialism.

Guided by the curatorial theme “Don’t even bring water (Bisan tubig di magbalon),” a line from the Visayan folk ballad Dandansoy, the exhibitions focus on the aspiration of returning to one’s roots. In the face of limited resources and opportunities, it has been common to desire for the global stage, neglecting in the process one’s place of origin. Each work is a consolatory testament to this economy of means as each artist searches for spaces and semblances of home that require no geographical anchoring.” –VIVA EXCON CAPIZ 2018 website

In the synchronicity of the festival flow, I felt extremely lucky to have attended the 15th edition of VIVA EXCON – the longest running biennial in the Philippines – from November 8-11, 2018 in Roxas City, Capiz Province, Panay Island. (As I’m finally posting my notes, in text and video draft, 3 (!!!) months later, I can also say its rich density of information likewise required many months of re-vision, re-turning, re-wiring my direction, in an endless drifting).

[If you are interested in reading write-ups of exhibitions and events by art writers and journalists, please do check out the published articles by Harry Burke, Mariah Reodica in The Philippine Star and Dominic Zinampan in AsiaArtPacific. In this post, I wanted to entangle the multiple, knotty, network of discourses that most resonated with me. What I have here is a series of bullet notes, with no target on site.]

VIVA EXCON 2018’s theme to “return to the roots” (Peewee Roldan, one of the co-founders of VIVA, is originally from Roxas City) is impactful for an islander, tribal, marine-based, migrant, diasporic community like the Visayas. Even the root word “Visaya” comes from the Sanskrit/Buddhist/Hindu/(etc) etymology describing an “object of knowledge/affection that changes when you get closer,” delineating a kind of “administrative unit” at the edge of the empire. “It is only from the roots that a tree grows,” a wise woman once said to me.

For me, from immigrant diaspora, the idea of ‘return’ is already a search of roots –my parents, their parents, come from one island, Bantayan (which translates to “watchtower”), which is central Visayan islands (its Cebuano dialect absorbs Hiligaynon & Waray languages), which is inter-island, inter-regional, inter-national, at the margins of the imperial center & nevertheless, a node in a global network. Humbling and joyous to meet other digital-media based artists from Bantayan!

The first day of the conference started with an inter-island updates on current municipal cultural industries and local arts initiatives from across Visayas. It’s happening here!! Yet similar “problems” have been identified throughout the region: funding, support, space, government.

“We not good at solving the problem, we only good at making excitement together!”

With this statement by Ismal Muntaha from Jatiwangi Factory opening the second day of the conference, it felt like the previous day’s discussions & debates on ‘problems’ that multiple Visayan communities faced in ‘making art accessible to the public’ faded away.

What happens when large-scale, grassroots projects engages the WHOLE community (not JUST artists or tourism directors or politicians) in myth-making, ritual, music, dance and creative arts for survival? Jatiwangi Art Factory in Jakarta, Indonesia, turned a town known for roof textile production in the early industrial era of Indonesia into a modern-day art-driven community. 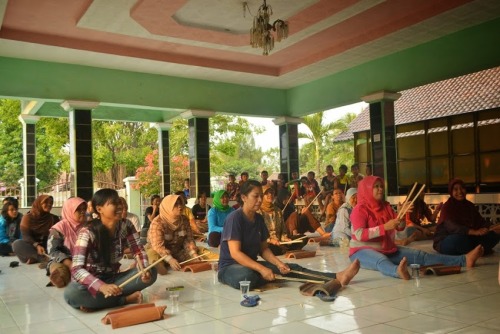 Photos from Jatiwangi Art Factory’s Ceramic Music Festival – “a landmark of the emergence of a new culture in Jatiwangi: Music from clay-based instruments or, simply, ceramic music” remolds the town’s earlier history as a roof textile company into a participatory ritual opening portals for the future.

On the other hand, what if your roots have been drastically shaped by histories of global migration and colonial influence? I couldn’t help but re-member curator Marian Pastor Roces comment on the sheer “complexity” of Philippine arts. 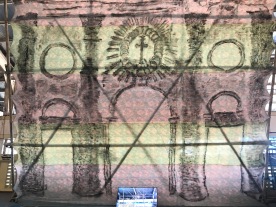 Ronyel Compra (Cebu) turns the large, formidable architectures of Visayan islands into delicate fabric and ephemeral video, projecting the imagined transience of its 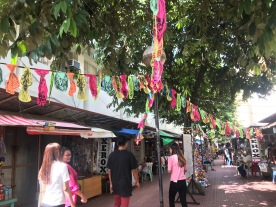 Notes: What if the strongest infrastructure of ritual arts and architecture in our roots is a church built by the Spanish in the 16th century? We’re not just talking about secular politics (of corruption), but a strong church influence. Who has the power of representation? Fascinating to hear Cheryl Anne Del Rosario’s re-telling of the Aswang Festival, which attempted to use place-based folk mythology to create a more locally-oriented ritual of Halloween. However, after 6 years, the church successfully fought for its closure, highlighting its heretic origins.

Notes on a question posed: How can the concept of  “self-sustaining communities in Visayan region” account for its settler-migration histories? To Manila and abroad? “Working” within local communities for Visayan context is not just about those that are there, but those who have left -and continue to haunt. How can the self-determination of OFW living abroad be also seen in relationship to the self-determination of indigenous peoples, at the margins of global survival? How can one’s roots be also complexified, not as a provincial returning, but a global cosmopolitaning? 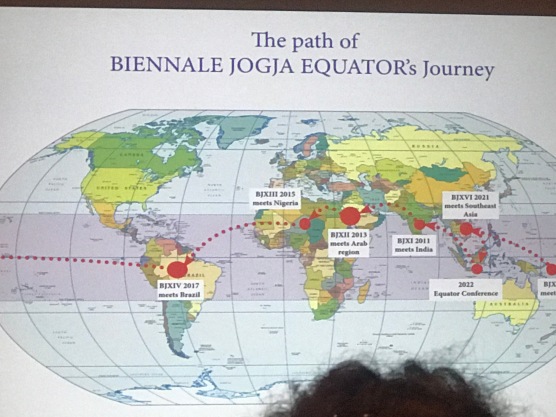 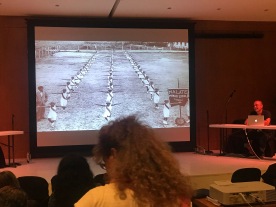 We cannot underestimate the power of money in politics and art. Art production is dependent on political economies of power, and the outcome of production is dependent on the politics. This is true for the world art market, as it is for the municipal festivals I’ve attended in Philippines. This is what makes VIVA an especially exciting festival to attend, because it acknowledges itself as a “political act” (Peewee Roldan) and not an economic-driven event.

Above: Dr. Cecilia Nava (Bacolod) asked an important question regarding the political beliefs that started VIVA. She also revealed her own struggles, as a self-funded artist, to receive proper payment from National Council of Culture & Arts. Charlie Co’s response on politics of VIVA:

How can art practice respond to political situations? In the fall-out of Sagay 9 massacre, VIVA co-founder Nunelucio Alvarado (physically absent from this year’s conference) continued to appear in discussions as an exemplary artist working his lifetime with local community to inspire political action and awareness. What is the relationship between working artist & governmental operations?

At one point, an idea to nominate Charlie Co for the senate circulated around the room. Artist as politician, why not? But as Jerilee Cameña, a development planner from Iloilo, asked to the artists in the room, “Do you want to have more legislation to make art or do you want opportunities working with local government?”

As Jerilee Cameña explained, in order to enact community projects, every LGU (local government unit) NEEDS a Comprehensive Development Plan which identifies specifics of project, including budget. Local councils approve the budget, on the condition that the drafting be representative of ALL sectors (25% of non-govt must be part of planning, including Civil Society Organizations). Artists have the chance to BE PRESENT at all levels of local planning processes, or be part of civil society organizations that participate because they have a stake in the project.

In reflecting on the presentations, curator Gina Jacobson (Bacolod) brought up the difference between a government funded festival or artist-driven festival. This is where Dr. Christine Muyco‘s research activism with the Panay Bukidnon (indigenous communities of Panay) becomes an interesting example of

Several times, the notion of the future “in the hands of the youth” reverberated in presenter and audience discussions. Watching from the seats, a community of #vivayout (playing on word for ‘queer’ [‘bayut’]) already began to identify themselves as part of a different generation of art practitioners. And yet, as Onna Rhea Cabio Quizo (Dumaguete) describes in her response to the Escalante Massacre, the experiences of martial law era and today’s political situation calls for collective remembering and individual investigations in the search for truth.

In the Panublion Museum’s Water Tank Museum, interactive media Liby Limoso (Iloilo) presented his audio-visual documentary of Panay Bukidnon epic chanting in Sugidanon Contemplations: Conjunction of Meaning and Place. Sometimes, some places, I can’t contain myself. I get so excited by works of art. I dance with them.

In that moment, I continued an ongoing movement investigation of my limbs, arms, fingers, toes, as margins of the center, trying to move a center of control, letting the edges tell the story. In a Visayan Philippine society colonized by many forces (even by a national capital & its standard of urban civilization), indigenous peoples -from Panay Bukidnon to the Tumandok Atis, Aetas- exist in the margins. How might these margins, like the Visayas itself, be recognized as a place of power? So moved to hear, witness and be present with the Liby’s piece, and also remember something artist Ginoe Ojoy said:

“Acknowledging the self in the margins is important because otherwise you have to affirm the center’s mode of value-making and make yourself valuable according to their terms. Manila people [in this conference] need to acknowledge that they have an outsider point-of-view. Being from the Visayans, being in the margins, means we can be erased, swept aside – literally, displaced.” Ginoe Ojoy (@hubineer)

One of the most exciting presentations for me as a researcher of Visayan festivals, was Dr. Cecilia Nava’s (Bacolod) presentation on MassKara Festival – the first festival I witnessed on this research trip. Like me, she also pointed its unique secular background (in the context of Philippine and global festivals) outside the confines of religion, tradition, history. She pointed out the festival, with its global influences in hybrid aesthetics, as a “process of becoming.” This idea, I believe, could be extended for much of the arts productions

OF BECOMING, FROM ALL SIDES

Beta.Ops (Cebu) video mapped submissions from their open call onto the ceiling. Beta.Ops is a video art collective in Cebu pushing the boundaries of video as a public art form.

This post needs a lot of re-vision, still, but I am going to leave it with this audio from wise, young Ginoe.