Like rice to our meals, beauty pageants are a staple to Visayan festivals. The glamorization of beauty aesthetic is as much part of celebration as the street dance competition or community procession. The beauty pageant for Miss San Carlos City 2018 proved to be no different. Yet, it far exceeded my expectations of what a beauty pageant might be, or is becoming.

The story goes that Princess Nabingka, a warrior leader from Cebu, sailed her peoples to nearby island, which they named Nabingkalan (the original name for San Carlos City, before its conversion to Christianity). But upon arrival, she fell ill. The community priestess, the babaylan, ordered everyone to plant flowers as a treatment for her sickness. When that did not work, the babaylan realized she needed to tattoo a flower directly on the princess to cure her. To honor this successful remedy, whole town covered themselves in flower tattoos. 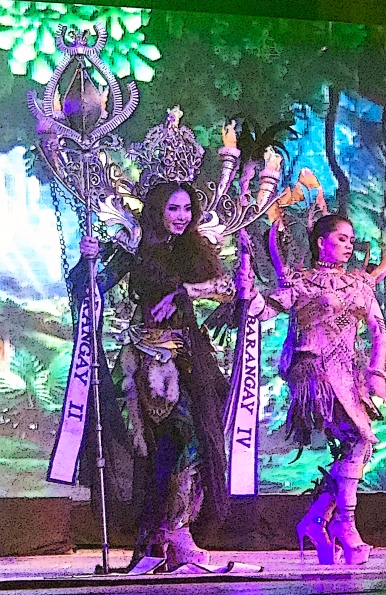 At first, I felt skeptical of this story. Is this a real oral tale or a ready-made reason to street party and stage pageantry? Yet as someone with two flower tattoos, one of which healed hurtful memories of burn scars, I also felt strangely gravitated to the story of this princess warrior… But after the show, I’m now a full-blown convert to this myth!!

In the opening scene, contestants paraded as costumed avatars of Princess Nabingka. Whatever she may have looked like in the long distant past, today’s princess channels a modern, neo-tribal aesthetic.  During the swimsuit section, background videos from the body painting and digital photography work of Eric Estampador Cabales set the stage for the spectacle.

While the conversion of Christianity forced the community to let go of traditional tattoo culture (or drove it underground), Pintaflores Festival’s celebration around the princess tale of flower tattoos helped catapult body painting as a popular art form. 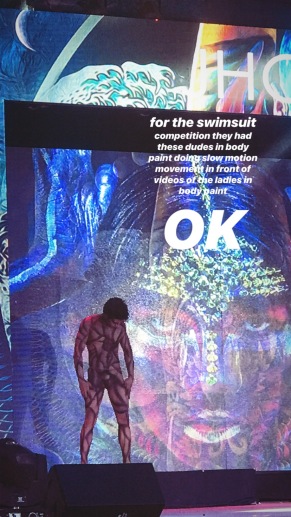 From the street dance to the costumed pageantry and now to the body painting, festivals may be viewed as a revival of indigenous pagan practices, mixed with Catholic holidays and secular rituals. At the same time, it is apparent that they also reflect globalized aesthetics of gendered beauty standards. 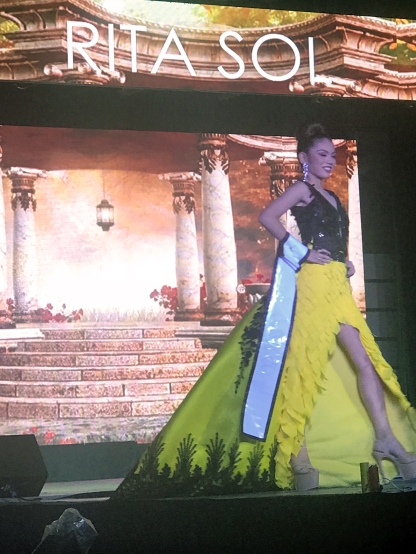 To refer again to Manny Montelibano’s “Here Distortion” (2016), I thought it a bit strange how women in this beauty pageant were expected to wear thick heels commonly worn by strippers. More than five women stumbled, tripped and fell wearing these heels (creating as much tension for the viewing audience as the contest itself), which are normally adorned for those who spend the night dancing for tips. Is there a relationship between strip clubs and beauty pageants, or are these heels purely ‘aesthetic’ reflections of femininity?

By what standards do we judge beauty in the modern day? While pageants represent very public spectacles of beauty, it is in stark contrast to the “binukot” figure of Visayan history. Binukots were secluded, veiled maidens who were not permitted exposure to sunlight until her wedding day. In her seclusion, she learned epics, dances, songs, oral and embodied traditions of her people.

Some years ago, while channeling a series of divinatory dreams on this figure, only to learn she did indeed exist in my native culture, I wrote a lyric prose poem, “Blink of a Binukot,” which tried to re-imagine the complexity of beauty, myths, tradition and modernity:

*A binukot is a real secret princess within the royal tower of power in precolonial Visayan society. Learning embroidery weaving, music playing and epic chanting in her solitary time, she maintained her social invisibility (except to closest family and slaves) until her wedding day dance, showed and sold as a high prized bride to the richest among male leaders. For anthropologists, she is a difficult figure to archive, since the practice is no longer common and never inscribed in written text except from colonial missionary descriptions (who ironically likened her isolation to that of church nuns). Her disappearance as a cultivated village tradition also marks the loss of epics, music and stories in (post)colonial culture, as she played a central role reproducing the cosmological myths of her society’s imagination.

In her social-corporal concealment, her skin lacked pigmentation of sun exposure and physical shell setback in muscular-skeletal development; fair and frail in her alienated state, she represented society’s standard aesthetic of worthy beauty. Supposedly, a budding binukot never even stepped foot on the floor, always ‘blanketed’ or held in a hammock (a relative root form, ‘bukot’ means “be blanketing, be swaddling oneself”). Virtually veiled to generate abstract value (mythical worlds of meaning), her estranged manifestation as blood-body commodity imparted honor and fame to her family. Her phantom position literally hidden inside the tower of tribal architecture projected elite prestige to those closest in relation to her. Among the heroines in well-known Philippine oral epics, all are secluded maidens such as the binukot. Her eventual erasure as a cultured persona in the postcolonial period of catholicized consciousness reflects the ruptured value-creating labor of collective people and their class-status program of conscience-control, on the spiritual path towards togetherness.

Though now only few Visayan village binukots survive, it is false to say that she, as a functionally hidden figure of higher force, no longer exists in the modern social structure found on the Visayan Islands after centuries of imperial influence. From the underground sex work trade to the international immigrant class of female care labor, fragments of the invisible woman – veiled with value – lie deep inside the contemporary attentional economy that worships the corporal reality of the commercially-constructed celebrity but contradictorily condemns her to moral criticism. The ideal ‘female figure,’ resurfaced photoshopped-perfect on print cover magazines, corporate advertisements and popular media, shadow projects the foundational force of ignored whores, forgotten mothers and undocumented women of color visually invisible, like disposable film, in today’s virtual real. Thus, the binukot, an artifact of distant assemblage past, inverts the digital historical archive, as an icon of society’s un/seen.

-“Blink of a Binukot” published in minor literatures

This is to say that just as beauty pageant contestants will change every year, so too will the standards of beauty shift over time.

How might popular trends initiated by festival pageants, from mythical cosplay to body painting to high-heels, also transform aesthetics of beauty?

*Big thanks to Ongtilabok family, for their hospitality and generosity to provide me nearly front row seats to this fully packed show!