Festivals celebrate the past in the present & pave way for futures: The final MassKara Festival weekend kicked off with an LED-lit moving float competition on Lacson Street, which turned a town’s main street into an immersive tourist strip.

A Coca-Cola sponsored “Electric Zumba” event started the festival’s sugar-high vibes, with two macho male dancers from Cebu leading a group of mostly middle-aged and older women into mass choreographed dance spectacle. Intuitively, it felt contradictory that a high-calorie sugar-filled drink would be the sponsor for a fitness dance class, but alas, it attracted the attendants to participate and mesmerized their audience to spectate – & fun cannot be computed in the rational realm!

Though wildly hypnotic, amidst  immersive LED-lights & sound-speaker blasted electronic dance music, I also felt a bit dizzy from the flood of electro-data stimulation. As I’m writing this, almost one month since the event, I’m still struggling to give words to the experience. How to make ‘sense’ from sensory overload? >>

I will begin with some strong observations.

Observation 1: This street festival its sponsored by corporations like Coca-Cola, Marlboro, Smart, Globe, etc. I did not expect that my first festival on this pilgrimage would be like a commercial break in global capitalism’s market.

>>> Is it a chicken-or-egg equation? Did the festival grow from corporate sponsorship, which stimulated spectators to the streets, or did the growth of street spectators require more stimulating activities?

>>> Or is it a matter of global capital? Mainstream growth of electronic dance music in concurrence with the rise of the internet (Read >> EDM: From Underground Movement to Commercial Phenomenon) & rise of the homogenizing global market (due to rise of the internet) better contextualizes the phenomenal growth of these electric street festival parties and their purposeful use of commercial sponsorships for interactive, immersive experiences.

>>> Or how much of this experience is about money, as it is about politics? This November 2018, President Duterte signed over 29 deals with “China” to help fund 75 infrastructure projects as part of his $180 billion “Build, Build, Build” economic strategy.” While mainstream media continues to cover this news as an ‘alliance’ between nations, it  mostly clearly reflects business deals of the rich and powerful, rather than economic interests of nation-state citizens (including and especially the Lumad of Mindanao, whose survival is threatened by these corporate, multi-international investments on communal indigenous lands).

(However, I’m not an investigative journalist, nor am I here to “critique” per se. I’m just a participant-observer pointing out the obvious-obvious.)

Without simplifying complexity, Local is Global. It is as if the internet, its global market, electric stimulants, popular soundtracks and corporate patrons were now 3D LED Projected in Reel Life.

Observation 2: Amidst this sea of logos, I got caught in a net of selfies. What happens to all this data? Where does it go? Is the moment snap captured & later discarded from memory (like trash consumed & forgotten on streets – but which never really disappears)?

I do not deny the power of selfies, of situating oneself in space-time, of marking moments of belonging, of remembering transformations. But the constant clicking from endless I’s eye made me wonder if people were actually plugged into the scene, or were cognitively embedded in the screens themselves, as a medium to experience the hyper intensity of electric stimulation.

Considering that MassKara festival organizers admitted to not having an ‘official archive’ of the nearly 39 years of this festival’s history (not a book, documentary, any organized collection), I am curious then, what *is* archived — selfies, toothed smiles, masks, gaps & all. How might this living archive, and its social media participants, be mobilized for making the future?

Little known fact: Manny Montelibano, an accomplished Bacolod-based filmmaker, video artist and director of the Institute of Moving Image at La Salle University, actually helped to initiate and direct the Electric MassKara street festivities for the first six years. Arriving in Bacolod with my ACC grant proposal “to record Visayan festivals and experiment with digital media participation,” I wanted to learn more about Manny’s work and his current initiative to start a Visayan Moving Image Archive. In an interview, he revealed his years of creative contribution to MassKara Festival.

When I asked Manny why he gave up the job of Electric MassKara street director after six years, he explained that he felt the festival became too commercially-oriented and catered less to the Bacolod community as it did to its tourist outsiders. He also mentioned that he did not feel comfortable continuing to work, as an independent artist between divisive politics and corporate sponsors. 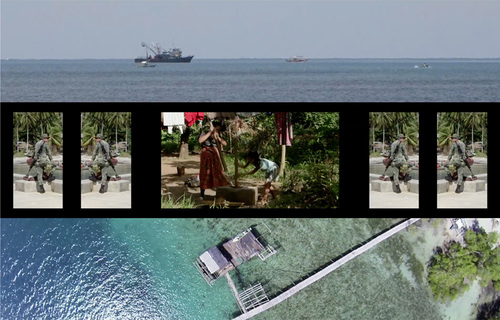 Given that MassKara Festival originated from the vision of local artists in the 1970’s, it is concerning when one of Bacolod’s most innovative artists today chooses to no longer creatively contribute to its community production because of over-commercialization.

What is the future of a festival founded by community artists, in which the community’s artists want to disconnect?

It feels that the trajectory of community members getting disenchanted by commercial festivals meant for celebrating community histories will only grow, likely in the same rate that the festival will attract outsiders to flock over for immersive street experiences. Digging through Manny’s digital blog, I found remnants of a street video art installation done in the early years of Electric MassKara:

Adventures of the Masked Man is a multi-channel video installation by Manny Montelibano and Dennis Ascalon. Installed at 20th Lacson St. Bacolod City. The 3 projections featured Bacolod City during the MassKara Festival. Together with visual artist Dennis Ascalon, the video production was shot in the streets of Bacolod City during the festival, the camera as the point of view of the person wearing the mask (POV). from mannymontelibano.blogspot.com

Super thankful to have engaged in conversation with Manny about his past work with MassKara Festival and his ongoing contributions to video art medium in Philippines and beyond the archipelago. Currently, he directs the Institute of Moving Image  at University of St. La Salle, which hosts summer workshops for filmmaking and new media. In addition, he is also starting the Visayan Moving Image Archive for Visayans to engage in video archives made from and for their communities.

Despite my experience of sensory overload at Electric MassKara, I am delighted to know that its first director is also the visionary innovator of Visayan Moving Image Archive.

At present moment, mainstream capitalism depends on local spectators as image consumers of global market in order to finance festivals like this. This model of corporate patronage (& in many cases, corrupt politics) is difficult for visual artists who want independent autonomy over their creative productions.

Yet current innovations wired through digital media and developing discourses of the “archive” might offer a different trajectory, which values creative contribution of community members as producers of ‘moving images’ (not merely consumers of pre-packaged images with classist, racist, gendered, hypersexualized significations inherent to global capitalism’s hierarchy of values).

My hope is that this spectacle will not get buried in facebook timelines, but will too become a site to conjure new speculative futures of digital media, data, video, photo, embodied & participatory archives, where immersive experiences become maps into a living culture of creative, collaborative productions.

This is a story to be continued…

[Big thanks to Kristoffer Ardena (founder of Moving Image Lab Filipinas), whose generous insights in conversation helped to draft this post.]