How to learn the history of a place? Start with native tongues. Its language and the taste of its foods. Or, go to its “museum” of art & history.

For Bacolod, the site of MassKara Festival, a bite of its history is sweet, with a twang of blood, sweat & tears.

The current exhibit up at the newly renovated Negros Museum, “Unrefining Sugarlandia,” is provocative for its re-presentation of Bacolod’s complicated social past, positioning the viewer to consider its place in the conditions of the present. 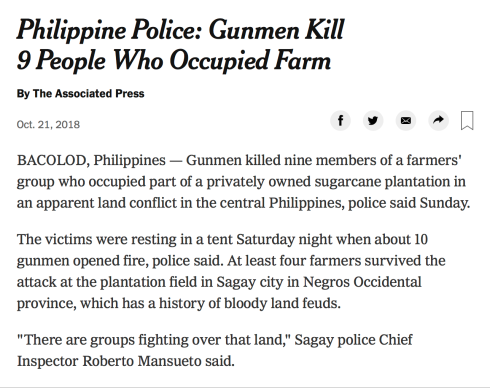 During this year’s MassKara Festival, NINE PEASANT FARMERS ON A NEARBY SUGAR PLANTATION WERE KILLED. How did we get here? >>>> Art is a place to start controversial conversations >>

Curated by Georgina Luisa O. Jocson, “Unrefining Sugarlandia” evolved in collaboration with artists from Gallery Orange and the Bacolod arts community. In today’s hyper global digital world, places like Visayan islands, which for centuries have already been exposed to global trade networks, have become ever more influenced by commercial, cosmopolitan creative productions. For the curator, this show provided an opportunity for local artists to make work rooted in the island’s soil.

And at the same time, this exhibit is not just for people of Negros or distant kin of hacienderos (sugar plantation barons). If you have ever eaten sugar, especially if you were born before 1980’s, there is a high possibility that you have licked the riches of this island’s resources.

The world as we know it transformed from the sugar trade. In Sidney Mintz’s Sweetness and Power: The Place of Sugar in Modern History, the anthropologist explores histories of slavery, war and corporate politics through sugar. Sugar made places like Negros on the map of global capital wealth, and its plantation owners among the world wide elite. Thus, the fall of the sugar industry, with the introduction of high fructose corn syrup in the 1980’s, resulted in massive financial ruin for families that once made millions off of consumer sweet tooths.

For those among us who love sweets but have never even considered those whose labor & livelihood depends on our taste buds, many of the works featured in “Sugarlandia” resonate the resilience of farm workers in the face of hardships. This artwork evokes affective relationships to the most vulnerable caretakers of this rich land and its resources.

I am horrified guilty perpetrators murdered peasant farmers, including children, protesting on nearby lands during my time here for MassKara Festival. But the Sagay 9 Massacre will not buried in the drunken memory of carnival revelry.

In the face of fascism and its tactics for media censorship, it is important that art institutions use their public spaces as sites of critical thinking and political imaging. It is vital, in the digital amnesia of hyper speed present, to envision the past & its futures in full-color spectrum.

I turn to this post photo from the Negros Museum as a reminder that public parade is, was, & can be mass protest. Street festivals, street demonstrations, reflect the People’s Power in numbers.

On this Halloween, amidst festivities, all the candy in the world will not taste as sweet. In memory of those lives who have been violently lost in the wars of sugar land. In the memory of ghost blood stuck between our teeth. In memory of the Sagay 9.

Check out the 20+ paintings and a few large-scale sculptures at “Unrefining Sugarlandia,” which will be up at The Negros Museum in Bacolod until November 30, with artists talks every Wednesday and Saturday at 3pm.